Please join us for an extraordinary evening in recognition of outstanding leadership. The annual Wayne C. Fox Distinguished Alumni Award honours a graduate of the DeGroote School of Business whose personal accomplishments, reputation and character have served to enhance the reputation of McMaster University.

Please consider sending Quentin a note of congratulations via message board or video clip. 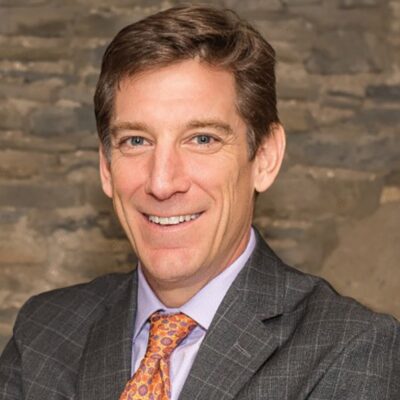 For three decades, McMaster has counted Quentin Broad among one of the most valued and impactful volunteers with the University, the McMaster Alumni Association and the DeGroote School of Business.

He graduated in 1986 with a undergrad in psychology, and then went on to pursue his MBA, which he completed in 1988. Upon graduating, his career path included roles at Scotiabank, Deutsche Bank, National Bank Financial, and CIBC Capital Markets. The latter reflected a successful trajectory over almost 18 years. In 2018 Quentin left the financial sector to become managing director of Capitalize for Kids, a not-for-profit organization that works with community partners to enhance our capacity to support kids’ mental health.

Quentin has been a long-time member of the DeGroote School of Business Advisory Council, a member of the Educational Training Centre Advisory Board, as well as the School’s trader-in-residence. Not soon after becoming a newly minted MBA, Quentin began his  volunteer engagement with the University, serving on the MBA Alumni Association board. Quentin joined the McMaster Alumni Association Board of Directors in the 1990s and served as president in 2001-2002.  From 2006 to 2018, he served as one of the Association’s representatives to the University’s Board of Governors.  During his tenure, he had the privilege to serve on the search committee that recommended Patrick Deane as the University’s 7th President. During his tenure on the board, Quentin served as chair of the Planning and Building Committee, was a member of the Executive and Governance Committee as well as the chair of the Investment Pool Committee. In 2018, Quentin was recognized by the McMaster Alumni Association with a Distinguished Service Award.

In addition to his dedication to McMaster and DeGroote, Quentin is an active volunteer, including serving on the Michael Garron Hospital Foundation board and governance committee, fundraising for United Way and serving on the CFA Society, Toronto Advisory Council.  In 2010, he received the Investment Industry Association of Canada’s Future Leader Scholarship Award. Of course, through all of this Quentin has been keenly supported by Dianne and his three children.

Establishing Influence and Executive Presence in a Virtual Worksphere