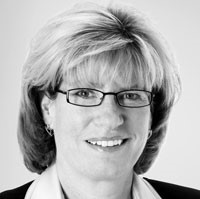 Recipient of the Wayne C. Fox Distinguished Alumni Award | 2004
Class of BCom '81
The information in this profile was accurate at the time the award was presented.

Karen has had an impressive career since graduating from DeGroote in 1981, working her way up the ranks of Canada’s financial sector. She was Clarica Life Insurance’s CFO during its demutualization. Karen was appointed Executive VP and CFO at BMO Financial Group in 2000, making her one of the highest ranking women in Canadian banking.

In addition to her professional accomplishments, Karen has served on the DeGroote Business Advisory Council. She was inducted into the McMaster Alumni Gallery in 2002.