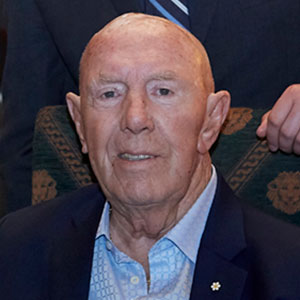 Recipient of the Wayne C. Fox Distinguished Alumni Award | 2017
Class of McMaster Honourary Degree 1992
The information in this profile was accurate at the time the award was presented.

Philanthropist Michael G. DeGroote is a self-made man whose extraordinary achievements in the world of business were predicated on a few distinct principles. He believes in hard work, doing the most with the least, being determined and consistent, being accountable, and above all, being decisive. Mr. DeGroote was born in Belgium and immigrated to Canada with his parents when he was 14 years old. Due to family financial pressures, he left school in Grade 9 to work in the tobacco fields in Langton near Tillsonburg, Ontario to help his family. At age 18, he bought an old army truck and began hauling manure from dairy farms to the tobacco fields. From that first foray into the world of business, he built a small trucking firm. In 1959, Mr. DeGroote moved to the Hamilton area. He purchased Laidlaw Transport Ltd., building it into the company that would become the largest school bus operator and third largest waste management company in North America. During the 1970s, Mr. DeGroote owned the Hamilton Tiger-Cats of the Canadian Football League. In 1988, Mr. DeGroote sold Laidlaw Inc. to Canadian Pacific and in 1990 retired to Bermuda where he still resides. His retirement did not last long, however, as he entered into several successful business ventures including U.S. companies such as Republic Industries, AutoNation Inc., Century Business Services and Capital Environmental Resource Inc. In 1990 he was made an Officer of the Order of Canada. Mr. DeGroote was awarded an honorary degree from McMaster University in 1992.