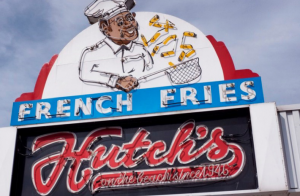 The typical peaks and troughs of the business cycle are compounded for seasonal businesses, as a large portion of their revenues is generated during only part of the year. The resultant fluctuations create unique budgetary and logistical challenges to overcome.

We approached Rick Creechan, the General Manager of Hutch’s on the Beach, for his secrets to running a seasonal business, and doing it well. After all, he has been successfully managing the classic Hamilton eatery, famous for its fish and chips, for almost 40 years.

Located in Confederation Park, right on Hamilton’s waterfront, Hutch’s is much more likely to come to mind as a place to grab some ice-cream or a classic diner-style meal during a warm sunny day, than it is during the colder months. In fact, business typically dwindles down to one third of its spring and summer levels during the off-season. For Creechan, managing a seasonal business like Hutch’s can be broken down into three core activities: increasing promotions, community involvement, and approaching cost savings with extra diligence during the off-season.

… word-of-mouth is great when people aren’t running around saying you’re closed in the winter.

Simply put, effectively increasing promotional efforts during the off-season results in higher traffic. Creechan explained, “We do a lot of advertising that’s specifically geared up in the winter.” Additional advertising from the end of October to the beginning of March each year includes spots on CHTV and notices in the local newspapers. And according to Creechan, this strategy works well, at least for Hutch’s.
Drawing upon his lengthy history at the restaurant, he goes on, “For a long time, we had a problem with people thinking we were closed during the winter. Mr. Hutch always had this philosophy that word-of-mouth is the only form of advertising we need, and word-of-mouth is great when people aren’t running around saying you’re closed in the winter.” Since increasing their level of advertising during the winter months, Hutch’s has seen an increase in sales. Creechan jokes, “We always tell people: it doesn’t snow inside the restaurant!”

2. Don’t Forget the Power of Community

Creechan also emphasized the importance of community involvement when it comes to keeping sales up during the off-season. Over the years, Hutch’s has supported a variety of community organizations and events, including the East Hamilton Optimist Club, the CIBC Run For the Cure, the Canadian Diabetes Association, and a variety of minor hockey and baseball leagues. Creechan advised, “It’s a really good idea to be community-minded because you’re doing something good for the community and you’re helping your bottom line.”

When you help out in the community, people want to support you back.

When we asked how Hutch’s has been able to tie their community involvement back to their bottom line, Creechan replied, “I’m behind the counter pretty well everyday, and I see the same people that I met at the community events. When you help out in the community, people want to support you back.”

Finally, Creechan highlighted the importance of being even leaner in terms of costs during the off-season. He said, “You have to be a lot more careful in the wintertime to not spend money that you don’t need to spend. For example, we always remind staff to be careful not to cook things too far ahead of time and then have to throw them out.”

Being lean may also mean laying off seasonal staff as the off-season begins. Hutch’s has about 20 core full-time staff who remain constant throughout the year. On extra slow days, they take turns going home early.

And employees seem to be happy with the arrangement. Hutch’s enjoys an unusually low turnover rate compared to industry standards, with a number of current employees that have been with the company upwards of 10, 15, 20, and even 30 years. Speaking on how Hutch’s is able to retain employees, Creechan said, “We are flexible if they need to trade shifts or take time off. We also set up a benefits plan for them and offer a competitive pay compared to restaurant.” Hutch’s low turnover is an indication that it is a great place to work, and another way in which the business stays lean in terms of costs.

In the end, perhaps these three core activities aren’t exactly secrets. maybe, more accurately, they constitute a simple and effective approach, tried and true, that has endured time (or at least more than 60 years) and proven to work in the real world.

This article originally appeared in the Quarterly Profit, a student-run online magazine at the DeGroote School of Business. Read more from QP . (Reposted with permission.)