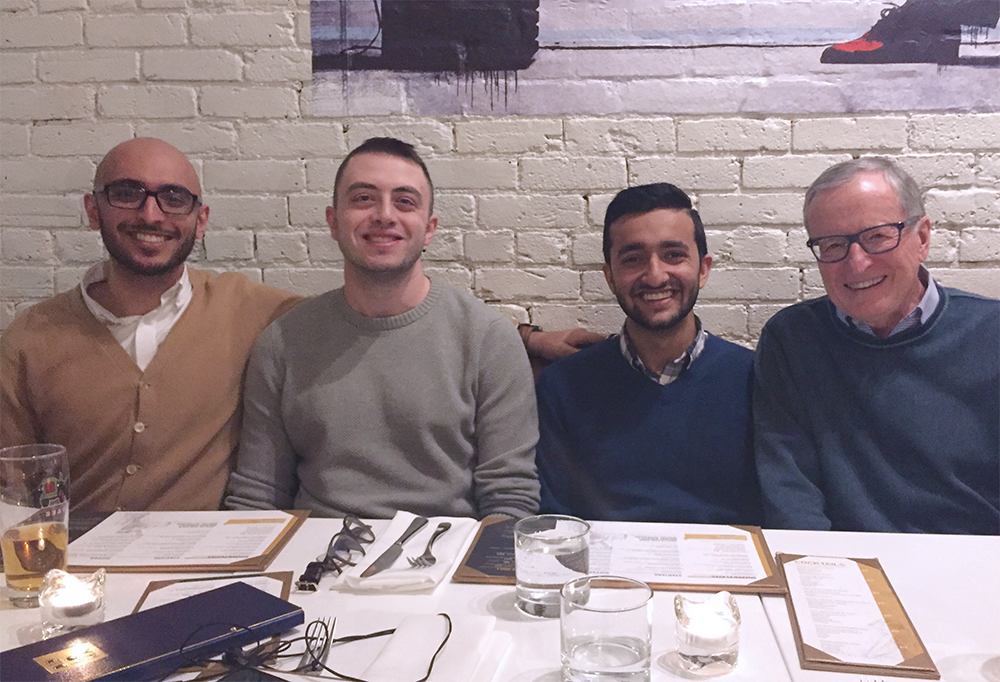 On a cold winter night, restaurants along King William Street are filling up with patrons looking for a warm bite to eat. Inside the Diplomat – a trendy eatery along this stretch – Krish Bilimoria waits at a table for a group of his old friends and colleagues.

Rounding the corner on his first term of medical school at the University of Toronto, Bilimoria was part of the first cohort of the Emerging Health Leaders (EHL) program at McMaster University back in 2016. Offered by the Health Leadership Academy, EHL is a two-week leadership intensive for bright young minds who want to deliver change across the health system.

Tonight, Bilimoria is meeting up with his former classmates and one of the program’s lead facilitators, John Rankin, to catch up on where their leadership journeys have taken them since the spring of 2016. Given their various commitments, this dinner is a rare opportunity to get together for some laughs and great conversation.

“Last time we got together, we were hearing back from schools for post-grad plans,” says Bilimoria. “It was a tense time, but this eclectic group of folks helped me to put things into perspective.””

A big smile stretches across Bilimoria’s face as Rankin walks into the restaurant.

“It’s great to see you!” Rankin exclaims, dusting the snow off his coat. “How have you been?”

Bilimoria shares a few highlights, as well as some of the challenges he has faced in medical school. Caught between his entrepreneurial spirit and the ‘way things are done,’ Bilimoria says he is figuring out how to apply the leadership skills he cultivated during EHL.

“It’s always a challenge to get the whole group to look beyond the task at hand,” Bilimoria elaborates. “To see the organization as an organic ecosystem, instead of a machine.”

Rankin nods knowingly, offering his own anecdotes from early in his career. “That’s the challenge for any leader,” Rankin says. “It’s about delivering change no matter where you are in the organization.”

During this exchange, fellow 2016 graduates Leon Chalil and Hadhy Ayaz arrive at the Diplomat, greeting Rankin and Bilimoria with a big hug.

As the group settles in, they reminisce about their EHL days. Even though each student took a different leadership path, all agreed that the skills they learned during the program have served them well personally and professionally.

Rankin recalls that during the EHL students’ one day off from the two-week program, Chalil did not rest. He turned up the next day with an opus on leadership.

Bilimoria and Ayaz affectionately poke fun at Chalil, who responds with a sheepish smile, noting that his leadership style is “nothing too dogmatic.” A student in McMaster’s prestigious MD/PhD program, Chalil says he is motivated by a curiosity about the world around him.

“Why do you have an opinion on everything?” Rankin asks Chalil.

“I reject the premise of the question,” Chalil responds jocularly. The group bursts into laughter.

“I’ve just always been that way,” Chalil responds more seriously. “I develop and test theories. It’s the best way I know to probe your own understanding and invite knowledge from others.”

Bilimoria says the desire for knowledge is also what drives him. “I read broadly and try to bridge theory and practice in the world around me,” he says. “Though I am in medical school now, I’m working on advising start-ups to test and iterate health innovations. It’s so important to read widely on what other disciplines can offer– no matter what field you are in.”

“Being narrow definitely limits your vision,” Rankin says, taking a sip of his pint. “Great leaders know how much they don’t know.”

Ayaz, a first-year student at Harvard Law School, says that an openness to new ideas is something he carries with him from EHL.

“I remember on our first day of the program, Dean Waverman said ‘most people don’t tend to listen; they listen only in order to respond,’” Ayaz recounts. “That really stuck with me and I try to keep that top of mind in my studies today.”

“It may not seem like there’s a thread linking my studies in health leadership and the law,” Ayaz continues, “But both share the common theme of welcoming different ideas. I don’t want one person to dominate the discussion.”

Beyond curiosity and openness, the group agrees that a team-oriented mindset is paramount.

“The common denominator with these individuals is that they are all confident, but they do what they do for the betterment of the team,” explains Rankin.

Bilimoria and Ayaz immediately recall a team-building exercise during EHL in which Chalil attempted to form a union. The simulation involves different stations working together to build a paper airplane. Off the top of the exercise, Chalil thought people were not being compensated accordingly, so he tried to drum up interest amongst his peers to form a union. Chalil says that he was just interested in seeing what would happen, noting that his interest in the union intervention was “purely academic.”

“In all my years watching that simulation, I had never seen anyone try to do that before,” laughs Rankin. “In retrospect, I wish we had let that scenario play out.”

Between the back-and-forth teasing are real moments of reflection. It is clear by Rankin’s satisfied smile and the way he intently listens to each student that he is immensely proud of the leaders they are becoming.

“They are on their way,” Rankin says. “Right now, they’re just good leaders, but I have a feeling they’ll be great ones.”