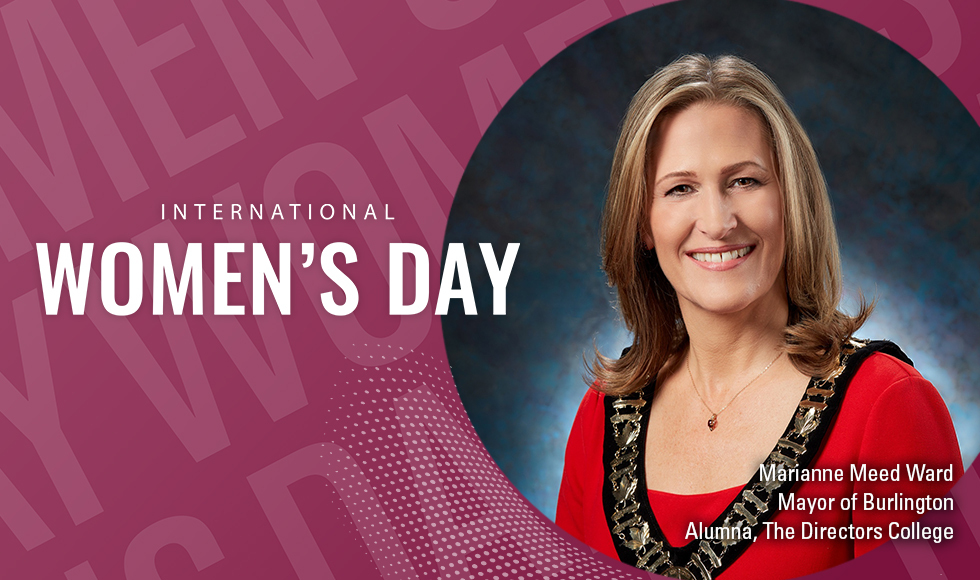 In honour of International Women’s Day, we spoke with Marianne Meed Ward, Burlington Mayor and The Directors College alumna about being a woman in a prominent leadership role. She shares her personal stories of barriers faced as a woman politician, tells us about women who inspire her, and shares her advice for the next generation of women leaders.

Meed Ward is the second woman mayor in Burlington’s history. She explains there are a number of ways being a woman has impacted her priorities and initiatives in the city.

“When I became the mayor that was probably the biggest title I’ve ever had in my life, but I didn’t become a leader the day I got the title. Some people go into politics just to be somebody, to have the title. I can tell you it’s never been about the title for me, it’s always been about how can this position be used to better our community,” says Meed Ward.

When people first think of politics, you may think of arguments, differences, and battles between opposing members.

“I believe politics should be about getting good things done for our community, and that means instead of operating in a combative, competitive environment, really trying to foster a collaborative one,” she adds.

The mayor is entering the fourth and final year of her first term. As a woman working in a traditionally male-dominated industry, she has faced many tough challenges.

When Meed Ward first ran in 2006 for municipal council, people asked her if she was even old enough to run. Being in her 40s at the time, she thought perhaps it could be taken as a compliment, but saw that her male counterparts were not asked if they were old enough to do the job. “Women in politics, like other fields, often get held to a different standard than men. We think there’s equality and there’s still these attitudes that persist,” she says.

This double standard surfaced again when she ran for Ward 2 Councillor in Burlington in 2010. Being a mother with young children in public school became a red flag on the campaign trail and a concern about whether she could do the job. Her competitors were two men with grandchildren and one woman with no children.

During a debate, each candidate was asked if they could devote the time necessary to this job. She admits it’s reasonable to ensure candidates understand this is a full-time position, but the innuendo around that particular question stung Meed Ward as her competitors implied that women with young children should not be in elected office.

She was last to answer that particular question. “I stood up and I’m looking at a room full of women with babies in strollers, young women and men listening to this question — they themselves who go to work, many of them outside the home — and I said, ‘I’ll do this the same way everybody in this room does it, by balancing family with work life; it’s something women and men have had to do for decades.’ And you know, I received such a positive response to that answer — because women saw themselves and the discrimination they face when you know people look sideways about whether they can do the job while raising a family and those questions don’t typically get asked of men in any job or in elected office.”

Although Meed Ward has faced hurdles and challenges throughout her career, she has maintained a positive attitude and focus on supporting other women. She gives back by offering internships, co-ops, and job shadowing to members in her community. She also recognizes the important role mentors played in her career.

Meed Ward is inspired every day by several women in her life. Her first job out of journalism school was working at a national magazine. Her first employer was more than a boss, she was a mentor who helped guide her, and taught her what it means to be a leader.

“One of the things my mentor gave me that I’ve taken throughout my career is sometimes you have to speak the brutal truth but do it in a way that is kind and respectful and finds a solution,” she says.

Meed Ward had aspirations of being an opinion writer. This goal came to fruition because her mentor gave her a chance. She wrote a column, and was proud of what she created, but her boss was honest with her. “She said this isn’t your best work and she gave me some specific feedback for how I can make it my best work. She was right and it didn’t feel awesome at first, but she was very kind about it, and it really was about saying, you can do better and here’s some specific ways you can do better. So, that kind of leadership style has really inspired me,” she notes.

Another woman that inspires Meed Ward is a career coach she worked with early in her career that told her: ‘You don’t have to make other people wrong to stand by your own views.’

“And I’ve really tried to live by that because there are lots of times when we have different perspectives, but we don’t need to tear somebody down to put forward a position,” says Meed Ward.

She takes this advice and guidance to heart because it focuses on being collaborative versus competitive. For Meed Ward, it’s about building respect and using her leadership position in a positive way because she understands it’s not the title that makes a leader.

“Leaders who are leaders only because they have a title will be limited in their ability to effect change. So, if you want to actually effect change and use your leadership position to do so, you must be somebody that people want to follow. And that means being inspiring, being compassionate, being resilient and flexible, and it means listening to perspectives and incorporating those,” Meed Ward says.

She encourages other women to be persistent and not to be discouraged by failure. “I ran in two elections, one municipal, one provincial and lost before I ran a third time municipally and won. And then was re-elected to my own seat and then ran for mayor and won. So, I lost twice before I won three times, and if I’d given up after the second loss, I wouldn’t be here,” she notes.

Meed Ward underscores you first need to believe in yourself and believe other people who recognize that you have something to give – even if you do not see it for yourself.

“This is something I’ve really struggled with as a woman, and I know other women do too. In our zeal to be collaborative and bridge-building and find the compromise and be flexible and find the solution that is possible, even if it’s not preferred, we sometimes give up our voice too quickly. I’ve learned the hard way to stand my ground,” she says.

Her advice for other women is to be flexible and know when to step away because she cautions you don’t want to undermine what you’re trying to achieve. Meed Ward takes the lessons learned from her first mentor about being honest, respectful and kind, and encourages other women to be empowered to speak up.

“Use your voice. Don’t let anyone take your voice, and especially now in this era of division that we have in our country and globally, and social media playing such a toxic role in many cases, no matter what you say you can be guaranteed to draw hatred and vitriol. The temptation is to say nothing because it doesn’t matter what you say, you can’t find the perfect words,” she says. “Use your voice, be brave, say what needs to be said, and be compassionate for those people that only know how to lash out.”

One thought on "Use Your Voice: Leadership Advice for Women"