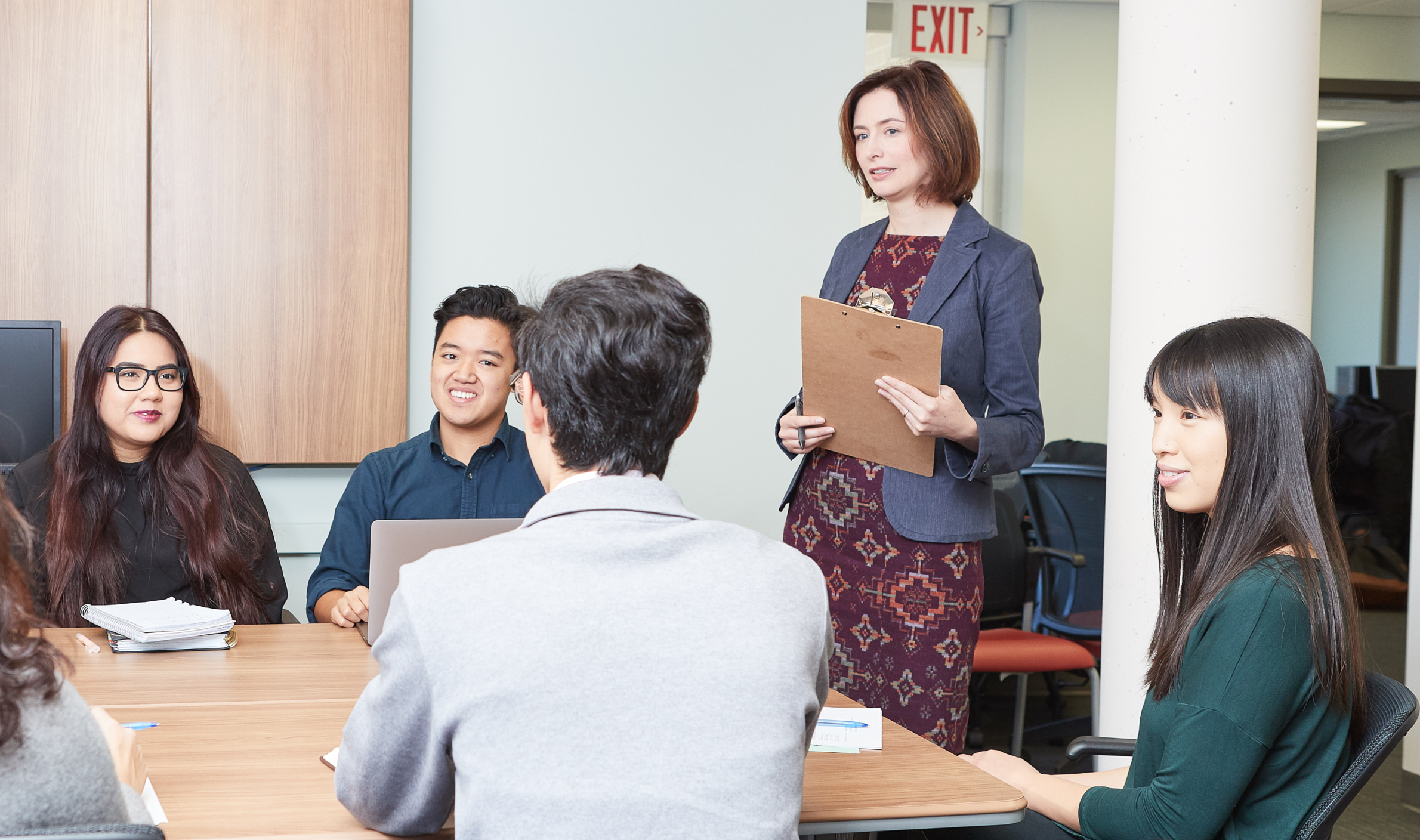 Catherine Connelly’s research is all about people’s behaviour and motivations.

She studies what causes some leaders to thrive while others burn out. Half a dozen psychology students work with students from business, life sciences and other fields at the Connelly Lab at McMaster, studying the complicated relationships between employers and workers in non-standard situations — such as foreign workers, contractors or employees with disabilities.

Connelly is a Canada Research Chair in Organizational Behaviour, and the lead author of a seminal paper about workplace knowledge hiding, explaining when and why people withhold information that someone else wants or needs.

But she is not a psychologist.

“I’m a business professor very much on purpose,” says Connelly, a professor of human resources and management at the DeGroote School of Business. “If you want to improve a system, you can’t be outside of it — you have to be part of the system and understand how it works, so you can explain to decision makers how their actions affect workers, and how to make it work better.”

Soon after she published her research on knowledge hiding, Connelly became interested in companies that wanted to lay off their workers, then made them train their own replacements before they left.

“I thought, ‘They may think it’ll work, but it is not very realistic,’” she recalls. She started a new research project, hoping to study how knowledge hiding would play into such a changeover.

“The project was initially going to be entirely about knowledge hiding and knowledge transfer between employees,” she says.

“And then I started my research and ended up talking to a lot of temporary foreign workers.”

The more people she talked to, the more she learned about the experiences of employees on work permits — some positive, others harrowing.

It wasn’t long before her research changed direction and expanded to become a study of the experiences of Canadian employers and temporary foreign workers.

That was in 2013. Now, her team at the Connelly Lab frequently collaborates with industry and community partners to study the experiences of in a rapidly transforming economy — temporary foreign workers, but also contractors, employees with disabilities, mobile workers, part-time staff and temps.

Connelly and her team look at how workers perform, how employers treat them and how knowledge hiding, leadership and a number of other factors play into the complicated relationship workers of this kind have with their jobs.

“A job is so much of your life,” Connelly says. “It’s usually a big part of people’s identity — it’s how you spend time, it gives structure to your days and it can bring additional meaning to your life.”

As well, Connelly is working with kinesiologist Kathleen Martin Ginis, a former McMaster colleague who is now at the University of British Columbia, on a SSHRC Partnership Grant. Connelly’s part of the project focuses on how employers provide performance feedback for people with disabilities.

“We came across some research showing that not only is it hard for people with disabilities to find a job, once they have a job, it’s hard for them to get promoted,” Connelly says.

“A lot of companies say, ‘Oh, I’d love to do that, but we just can’t afford accommodations,’ because maybe they think the accommodation costs are going to be really high — a lot of special equipment, which isn’t cheap. But that’s not usually needed,” she says.

“In our pilot study, we found that there is a net savings from hiring people with disabilities, because the accommodation costs tend to be way lower than people would assume. And we found that the employees who had disabilities had slightly above average performance, with low turnover, so there ended up being thousands of dollars in cost savings overall.”

A lot of existing theories on how organizations should work don’t consider the complexity of the human experience, Connelly says.

“In a meritocracy, you have to really consider everybody’s potential contribution,” she says.

“And I think there are people who get overlooked and they have a lot to contribute if they get the opportunity. But then you need systems in place that give them a fair chance.”