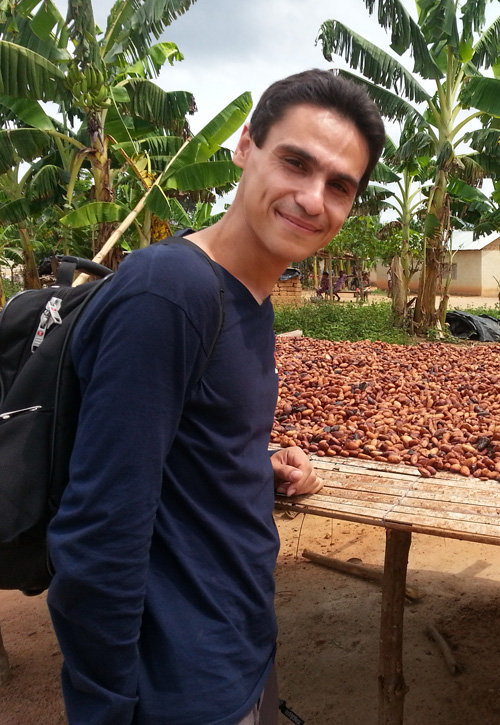 In September of 2013, MirHossein Tabatabaei, a Ph.D. student at the DeGroote School of Business, boarded a plane in Toronto for the West African country of Ghana. Having previously travelled extensively before this trip, arriving at an unfamiliar destination was not a new experience for MirHossein. His arrival in Ghana, however, began a three-month journey that would change his perspective towards life forever.

As a child, MirHossein and his family travelled from Iran to India and England and then back to Tehran in order for his father to complete his graduate studies. Following his father’s footsteps, MirHossein’s education also took him to different countries: he completed his B.Sc. in Mechanical Engineering at the University of Tehran, he got an MBA at the Sharif University of Technology, and his current Ph.D. studies at McMaster University’s DeGroote School of Business have taken him to both Canada, and of course, Ghana.

Additionally, while he was in India, England, and Canada, he travelled multiple times to the U.S., Scotland, France, Netherlands, Germany, Luxemburg, Belgium, Turkey, Nepal and many other countries in the Middle East.

“After all these years of travelling” MirHossein observes, “I’ve never been in one place for more than seven years. I’ve always been travelling. And at the end of the day I think that everyone on this planet is all the same. They have the same virtues. They have the same principles. It’s just the small things that make them different.”

MirHossein’s ability and interest to see this common humanity in people from different nations has guided some of the most important decisions in his life.

When he came to Canada to pursue a Ph.D. in Business at McMaster, he initially focused on organizational leadership. But, in the second year of his Ph.D. studies, he decided to combine his focus in organizational leadership with his passion for social sciences research and social work. This led him to change his theoretical model to a focus on the relation between living standards and its psychological consequences. Interestingly, although this shift in theoretical models was for his interest in social work, he notes that this multidimensional model greatly contributes to the literature and practice in corporate organizations as well.

MirHossein’s new interdisciplinary thesis project required him to collect field research data. Therefore, during a period of about one year, he initiated a wide networking campaign to get in touch with project managers and executives from international organizations and NGOs worldwide. He managed to secure projects from South American countries such as Bolivia to African ones such as Burkina Faso and Ghana. After multiple rounds of negotiations, he decided that the Ghanaian enterprise was the best option serving his research needs. Once MirHossein had completed the preparatory work, it was time to board the plane bound for Ghana to begin the field research. 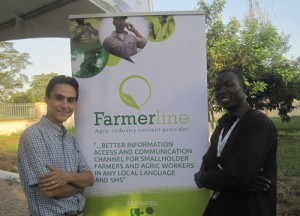 MirHossein’s experience regarding Ghana began with being introduced to a local social enterprise called Farmerline. Founded by Alloysius Attah and Emmanuel Addai, Farmerline is an organization that is devoted to helping local farmers improve their yields and thus, to reduce hunger and poverty. Farmerline sends farmers the best practice information on managing farms, marketing information, and other issues that are related to farming. Although Farmerline is only over a year old, it has been extensively successful in attracting international organization’s and NGO’s attention with its web and phone-based communication platform. As examples of many, Farmerline has been selected as the winner of the World Bank and InfoDev mAgri challenge, World Summit Youth Award and Apps4Africa competitions and also most recently, as the 2014 fellow of Echoing Green, which is a well-known global organization investing in early-stage social enterprises.

The ubiquitous cellphone is the key to Farmerline’s success. Farmerline uses basic cellphone technology to send voice messages or texts—in the farmer’s respective language—that contain helpful tips and advice on farming practices and sale strategy. MirHossein notes that this ingenious social aid method is particularly helpful for the local farmers because it allows them to access expert advice on their cellphones—one of the very few communications technologies that is widespread in Ghana.

MirHossein had worked with Farmerline before going to Ghana, helping out the energetic team with management consulting projects such as impact monitoring and evaluation, business development, user experience research, and income generation techniques. However, his experience with Farmerline in Ghana gave him a profound insight into the value of social entrepreneurship opportunities like Farmerline: “giving back is not only volunteering or raising money for food… giving back to society is to also support local entrepreneurs to independently, proactively, and sustainably produce value for themselves and their local communities.”

MirHossein echoes an often overlooked social aid strategy: If organizations want to help developing countries in the long term, they should provide education and support on tools and skills that are necessary to sustain long term growth instead of temporarily aiding them with short term supplies. In addition to the value that social entrepreneurs, like the ones at Farmerline, offer to Ghana’s long term development, MirHossein also noticed that local social entrepreneurs could readily empathize with farmers because they had been through similar hardships in their lives. 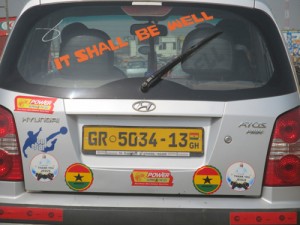 MirHossein’s field research consisted of having Ghanaian farmers take questionnaires so he could assess how poverty affects their stress and happiness levels. After he spent time helping Farmerline, he began working on the questionnaires for his thesis research. The questionnaires were a difficult process in his research as he had to modify them in order for them to be understood by the participants.

Staying true to his own realization that it is only the little things that make people different around the world, one detail stood out to him while he was in Ghana. It was not the service or the way the cabdrivers drove that caught his attention. His attention was seized by the big white letters that were pasted on the taxi cabs’ sides and back that spelled out spirited mantras of faith and hope: “love for all , hatred for none”, “It shall be well”, “All shall pass”, “who knows tomorrow”. The optimism that MirHossein witnessed in his research subjects seemed to extend beyond the agricultural sector.

On December 25, 2013, MirHossein and his wife travelled back to Canada from Ghana. In almost three months, he compiled 345 eleven-page surveys, in addition to many great friends and memories from Ghana.

MirHossein is now in the latter stages of writing his thesis. At times, his journey to this point has been challenging. The experience, though, has left a lasting impression on him—a revitalized passion for social entrepreneurship that is largely inspired by the unshakable Ghanaian spirit.