This article is part 3 of a 4-part series. Read part one. Read part two here.

Success in this city is the crowning touch of a career, the confirmation of Frank Sinatra’s line from his classic tune New York, New York, “If If I can make it there, I’ll make it anywhere.”

The adjustable man: Rick Nino is in New York today, having breakfast at the New York Athletic Club, a venerable old edifice on the southern edge of Central Park. But he could just as easily be in Boston – his U.S. base – or Montreal, site of his firm’s head office, or Waterloo, which is his home address. Or in hometown Sault Ste Marie where his parents still live. Or somewhere in the United States, doing business.

At 60, he is a continental commuter, part of the vast cross-border financial community tied into Wall Street. Boston is part of that community but it is also the anti-New York — think Yankees vs Red Sox, Ted Williams vs Joe Dimaggio, Bobby Orr vs Brad Park. Nino loves the incessant hum of New York, and he enjoys popping in and out, but Boston has become comfortable for him.

“Boston is a big little city and I have good roots there. I can walk to work. It takes 10 minutes to get to Logan Airport. There is the ability to maneuver without the craziness of the traffic. I love New York but Boston aligns with my DNA.”

Give Rick Nino a town and a job and he will find a way to make it work for him. It was the Soo growing up, working summers at Algoma Steel while pursuing a bachelors of arts from Western and an MBA from DeGroote. There were stops in Calgary, Waterloo and Toronto – in petrochemicals, waste management, forest products, and pension fund management.

He has reunited with old colleagues in his current role as executive vice president, institutional for Fiera Capital Global Asset Management. His sheer joy of travel and new experiences makes him the ideal candidate to roll out a U.S. expansion for Montreal-based Fiera, an institutional investment manager.

As he eats breakfast, the phone rings – it is his physiotherapist’s office asking about his recent hockey injury. He plays in seniors’ hockey leagues in Boston and Waterloo, but this time his pain comes from a collision at an arena in New York’s Chelsea area. He went into the boards hard and the result was rotator cuff and bicep surgery.

With a rueful smile, he notes that in the Chelsea league, “Rule No. 1 is no contact; Rule No. 2 is forget Rule no. 1.” After all, this is New York, where you can’t play the game without a bit of contact. 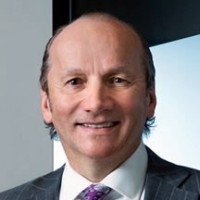 This was part three of a four-part series. Read part one. Read part two here.