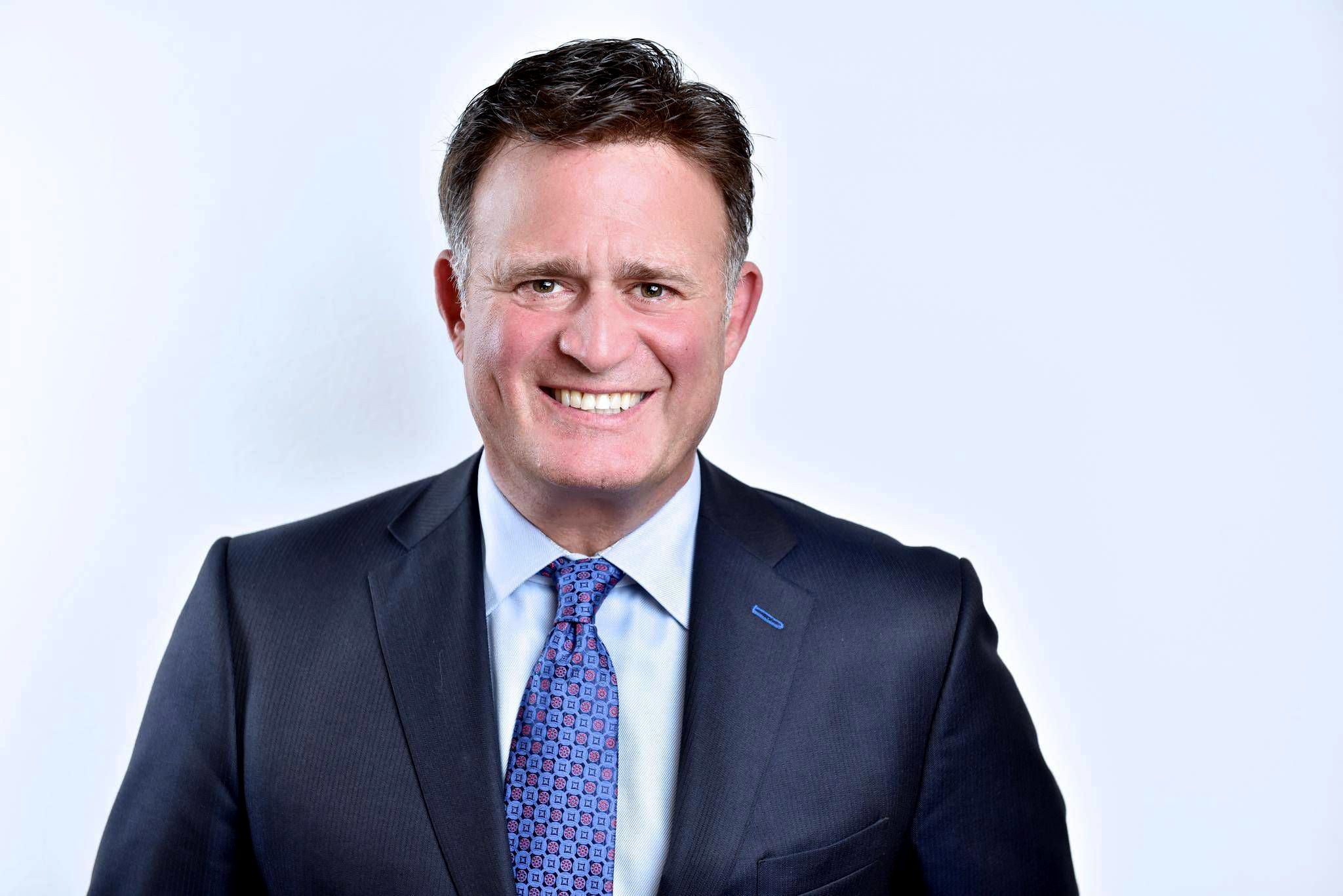 Dino Trevisani, BCom ’87, came to McMaster to play football after being a high school star, and got caught up in the excitement of his courses. He’s now based in London, UK, and serving as IBM Senior Managing Director, HSBC, and Chairman, IBM Canada. He’ll receive the Wayne C. Fox Distinguished Alumni Award May 24 in Toronto.

They were four university commerce buddies, inspired by their McMaster University professors and eager to take the pulse of Wall Street. Dino Trevisani, BCom ’87, was one of the gang, a wide-eyed Hamilton working-class kid on his first tourist trip to New York City in the mid-1980s.

That trip changed his life in a way he could not have guessed.

To start with, the four friends headed off to observe the legendary New York Stock Exchange in action. From the gallery they thrilled to the frenetic scene on the trading floor, and decided they would be traders themselves someday. They then walked out into the streets of Manhattan.

As he wandered far from Wall Street, Trevisani stopped to admire an impressive office tower. A man came out of the doors, and the young Canadian asked what business was located there. “It’s IBM, the greatest company in the world,” the man said.

So much for being a Wall Street trader. “I decided right then I would work for IBM,” says Trevisani, nearly 35 years after that meeting, on the phone from London, UK, where he recently relocated as IBM Senior Managing Director, HSBC, and Chairman, IBM Canada.

When he graduated from McMaster, he applied for a summer intern’s stint at IBM, and landed the job. “Because I was at a great university, IBM posted the job there,” he says. “If they hadn’t, it would have been so hard to get my name in there.”

Not only would he eventually work in that same Midtown Manhattan building, but he would ascend to the pinnacle of IBM’s leadership. His career would carry him through finance, sales, and human resources, and into a key leadership role in the American South. He gained widely-sought banking industry expertise, and recently took on the role of problem-solver who would tackle tough jobs.

This combination of a successful career – still far from finished – and intense community engagement is being recognized by the DeGroote of Business via the Wayne C. Fox Distinguished Alumni Award, to be handed out to the 53-year-old Trevisani later this month. The award is one of McMaster University’s highest honours.

Adam Cappelli, his friend since age 13, was there in New York when Trevisani made his youthful vow to work for IBM. “He is very loyal, with a stick-to-it-ness,” says Cappelli, now a lawyer in Toronto and Burlington, adding that “no one has worked as hard as Dino” – beginning as a high schooler who combined his studies with a full-time restaurant job.

It was that brew of McMaster’s academic grounding and unstoppable work ethic that set him on the way. In time, he would give something back to all his influencers – to IBM, where he has been a fire-fighting  executive, as well as to Hamilton, McMaster, and DeGroote, where he led IBM Canada into becoming a corporate partner in the Executive MBA in Digital Transformation (EMBA).

And he continues to give back to Canada by championing projects – from a Hamilton business incubator aimed at taking the city’s, and McMaster’s, healthcare expertise  to the world, to locating major IBM technology centres in Canada, such as cyber-security in Fredericton or deep-ocean research in Halifax.

It may seem quaint, in this time of rapid economic upheaval, to spend an entire career with one company, and to ride that company to the top. It is, in fact, a model of how to build a resilient career in an age of digital transformation.

When Trevisani first came to IBM, it was still known by its history as a mainframe computer business. But as the microcomputer revolution took hold, IBM went through an existential reckoning in the early-1990s when it was nobody’s idea of the greatest company in the world. Trevisani watched as the company shed many of his colleagues and made the wrenching transition to a services organization.

In essence, it meant starting over, and Trevisani decided that “I needed to be part of creating a great company.” There have been twists and turns, but the company remains an important global technology player, now positioned in artificial intelligence, data analytics, cybersecurity, and the cloud.  In a sense, Trevisani has worked for not one IBM but a number of them.

All the time, he has been reinventing himself with the agility that IBM itself has had to fashion. “My job changed every day. You could not say, ‘I am a mainframe guy or a software guy’ – you had to continually learn and continually change.”

His London appointment, which began in March, means managing the IBM relationship with the global bank, HSBC. It comes after his stint as president of IBM Canada, where he turned around an under-performing organization. Along the way, he founded a successful Canadian healthcare analytics company, which he has since divested.

The Canadian job meant he could stay close to his three siblings and his parents – now in their 90s and living in their own house in Hamilton – and cheer on his beloved Tiger-Cats. That is more challenging now from London. His mother, Eva, has to keep tabs on his eating habits from afar and he suspects he will have to get into that other football, the one with the round ball.

In fact, a teenage Trevisani came to McMaster to play North American-style football after being a high school star – and got caught up in the excitement of his courses. He learned about marketing from a then junior academic, Assistant Professor Marvin Ryder, and finance from strong teachers like Professor Luke Chan. But he also took a lot from his father, Quinto, a canny real estate investor, whose credo was to “buy low and sell high.”

Today,  Dino recognizes a scarcity of high-tech professionals and believes Canada can fill a lot of the gap – and those opportunities can be kept in Canada. His commitment to IBM’s educational mission is holistic, at one level giving EMBA candidates the experience that will shape them into digital leaders, but also supporting Indigenous students and running camps to inspire young girls in their visions of careers in science and tech.

He confides that even as his jobs got bigger and his salary rose, “I always thought I could just change people’s lives.” He is doing that, whether helping tech entrepreneurs crack global markets or providing for a new hospice in Dundas. “It doesn’t matter where I am – I am so attached to this community.”

One thought on "Celebrating a global business leader: Looking back on the life and legacy of Dino Trevisani"

Days of Life with Sarah Rotella (May)

Days of Life with Megha Tretha (May)

Days of Life with Chloe Asselstine (May)