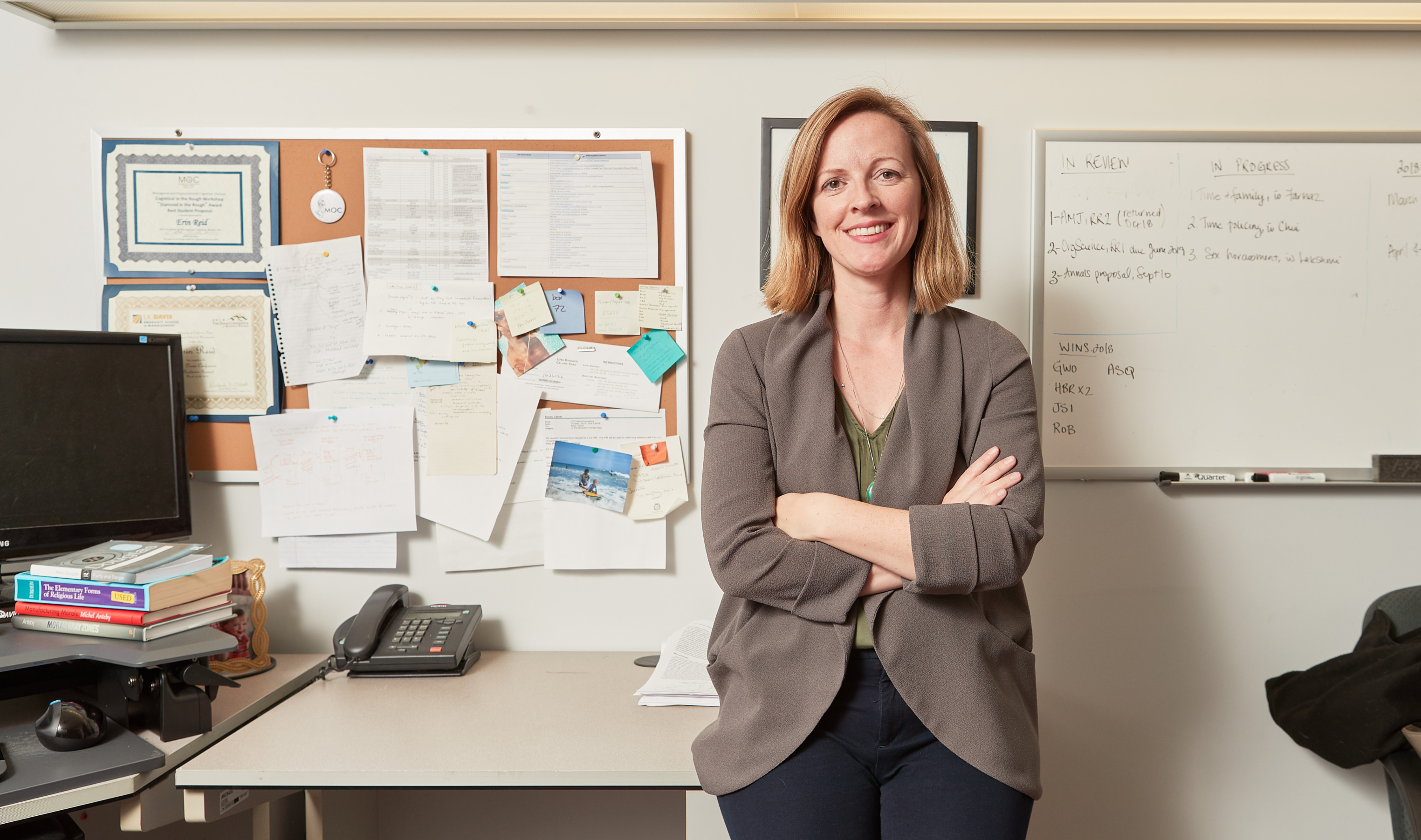 “A lot of workplaces are pretty hostile to women, and it seems like there’s a culture of accepting general hostility toward women, especially in fields where you can make a lot of money or advance quickly,” says Erin Reid. Photo courtesy of Kevin Patrick Robbins.

When Erin Reid started studying workplace inequality as a doctoral student at Harvard, there was no shortage of research on the subject.

“A lot of studies asked women how they feel and concluded that we have inequality because women don’t like to work long hours; they have children they want to be with; their husbands have important jobs,” Reid says, counting off the reasons. “So their own careers become secondary.”

But Reid noticed something: Across the board, researchers had interviewed only women. “There were almost no studies of men at that time,” she says. What if men also disliked working all the time, she wondered, and the results were skewed simply because no one had asked them?

“I decided to study how men cope with long work hours,” says Reid, an Associate Professor of Human Resources and Management at the DeGroote School of Business.

That work became the subject of her dissertation, and of several papers she has published since.

Reid started by interviewing employees at a large strategy consulting firm that was working with her PhD supervisor.

“They were struggling — they thought — to retain women,” she says.

They were surprised when the first thing Reid and her supervisor found was that men and women were leaving the firm at the same rate.

“They had a problem retaining both men and women,” she says, “they just didn’t recognize it.”

Reid also found that more than half the male employees at the firm resented it when work constantly intruded on their personal time or demanded they put the job ahead of their family commitments.

“The men there had two strategies for dealing with it,” she says.

“The other way was to do what women were encouraged to do, and just ask for a part-time arrangement,” Reid says. “It didn’t work out so well.

“When men took those formal accommodations, the firm could say, ‘Well, maybe these aren’t the guys we want working here.’ The ones who were able to fake it ended up being rated quite high performers and were promoted at high rates.”

“People were always asking women, ‘Who’s taking care of your kids? When are you going home to your kids?’ And if a woman wasn’t in her office late, people assumed she was at home handling family commitments,” Reid notes. “But if a man wasn’t around, they assumed he was out with a client or in a meeting.”

These double standards are just one of several aspects of professional life Reid is looking at through a lens of gender and identity.

“A lot of workplaces are pretty hostile to women, and it seems like there’s a culture of accepting general hostility toward women, especially in fields where you can make a lot of money or advance quickly,” she says.

“It puzzles me, because I think most men and women are very well meaning, and if everybody is working they should all have equal outcomes for equal work.”

Reid is also working with Brianna Caza from the University of Manitoba on a shared SSHRC Insight grant to study resilience in the gig economy.

In another SSHRC-funded project, Reid is focusing on how gender shapes careers in an economy where workers can hold down half a dozen jobs at a time, none of them with a stable workplace.

“A lot of my research thus far has been about gender and identity in traditional organizations,” Reid says. “Now I’m starting to think about how gender identity shapes careers in our shifting world of work.”

Addressing inequity isn’t just at the heart of Reid’s research, it’s an integral part of how she teaches DeGroote MBA candidates and third-year undergraduates at DeGroote.

“Sometimes I think about the goal of my research and my work, and it’s to help people craft more satisfying careers,” she says.

“I want to help men and women have equal opportunities, and help people learn how to navigate discrimination and inequality.”